Today the day started completely white. Luckily the nets were not frozen, so we were able to open up the nets. Because of the cold, we split up to be able to make every fifteen minutes a round to prevent any casualties. At some time, we switched who did the stationshaven so we were both able to eat some breakfast. Mikkel did not do the seawatch because of the cold, so he also helped us with the extracting the birds. Besides the helping with the ringing, Bello found a nice group of skylarks that were eating at the parking lot. Morten took some nice pictures of. Morten also saw a black redstart and a wheatear, I bet they did not expected the snow when they departured from their wintering grounds further south. Bello had today a day full of raptors. First, he saw a hen harrier, then we had a rough-legged buzzard hunting in the military zone, and he ended of with some buzzards and two white tailed eagles. The rough-legged buzzard is quite a good species, because there were no records of it in the area since autumn ’20. Because of the very faint undertail and whitish was on the upper side of the hand, it is probably a 2k (born last year). 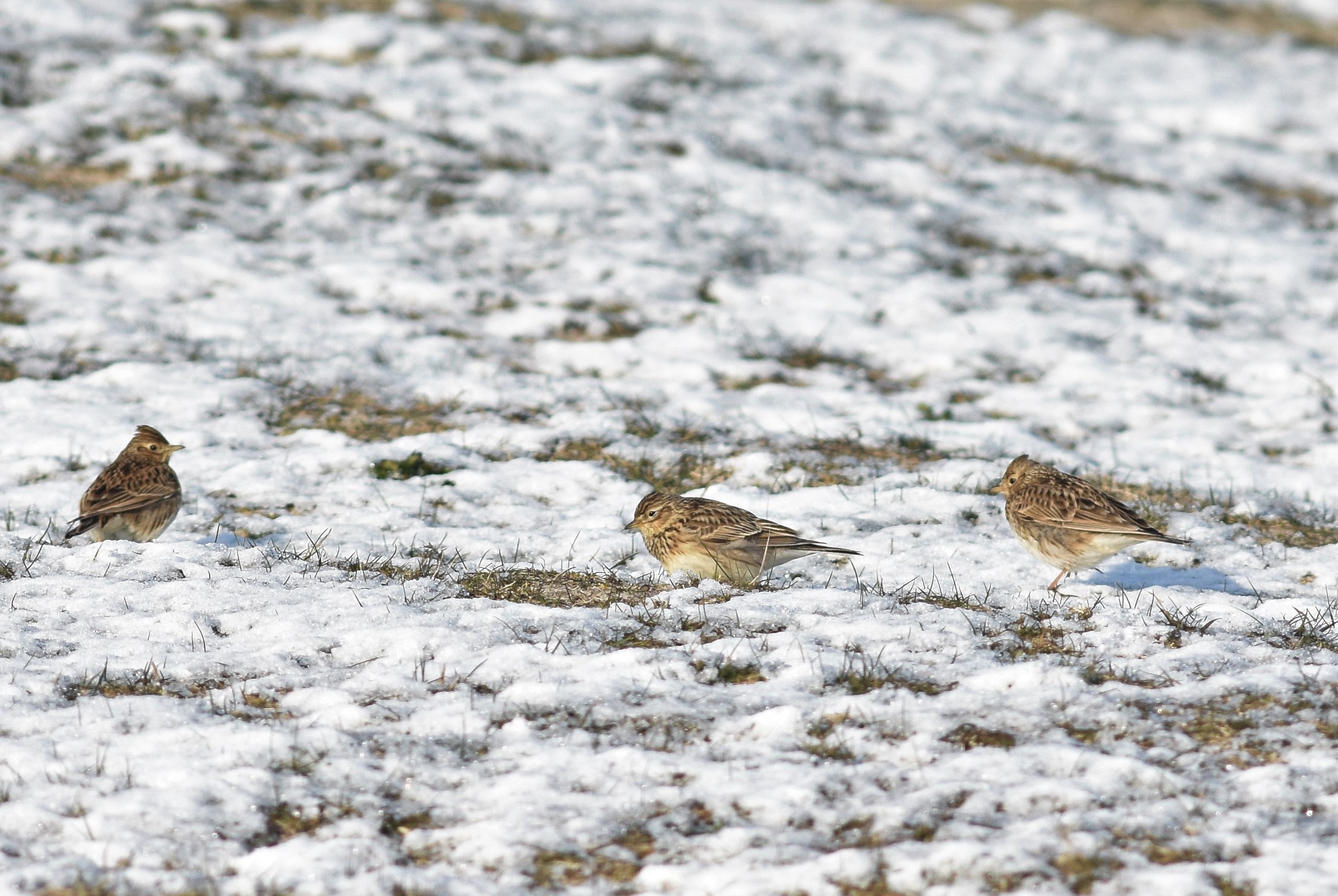 My first full month has finished now, still three to go! I hope that the following months will be as good as last month. Last month, we caught a record number of birds, 498. In the history of this Fuglestation, there was no year were this many birds were caught. Unfortunately, we could not make 500 because there were almost no birds around on today, we only managed to catch 11 new birds. In total 27 species have been caught.

In the first month, there were quite some ringing highlights. What to think of the sparrowhawk? or of the long-tailed tit, and now I almost forget the fieldfare, all quite rare in spring in the nets.

From the observing there were also some highlights. The massive passage of waders and ducks, which were blown out of course and flew back to the waddensea and at the same day we saw a black guillemot. Next to that, we also saw a black scoter, a good find of Mikkel. Mikkel was sharp this month, resulting in a black tailed godwit and a great northern loon and serin 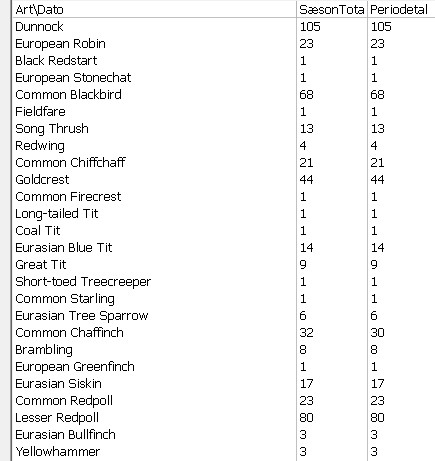 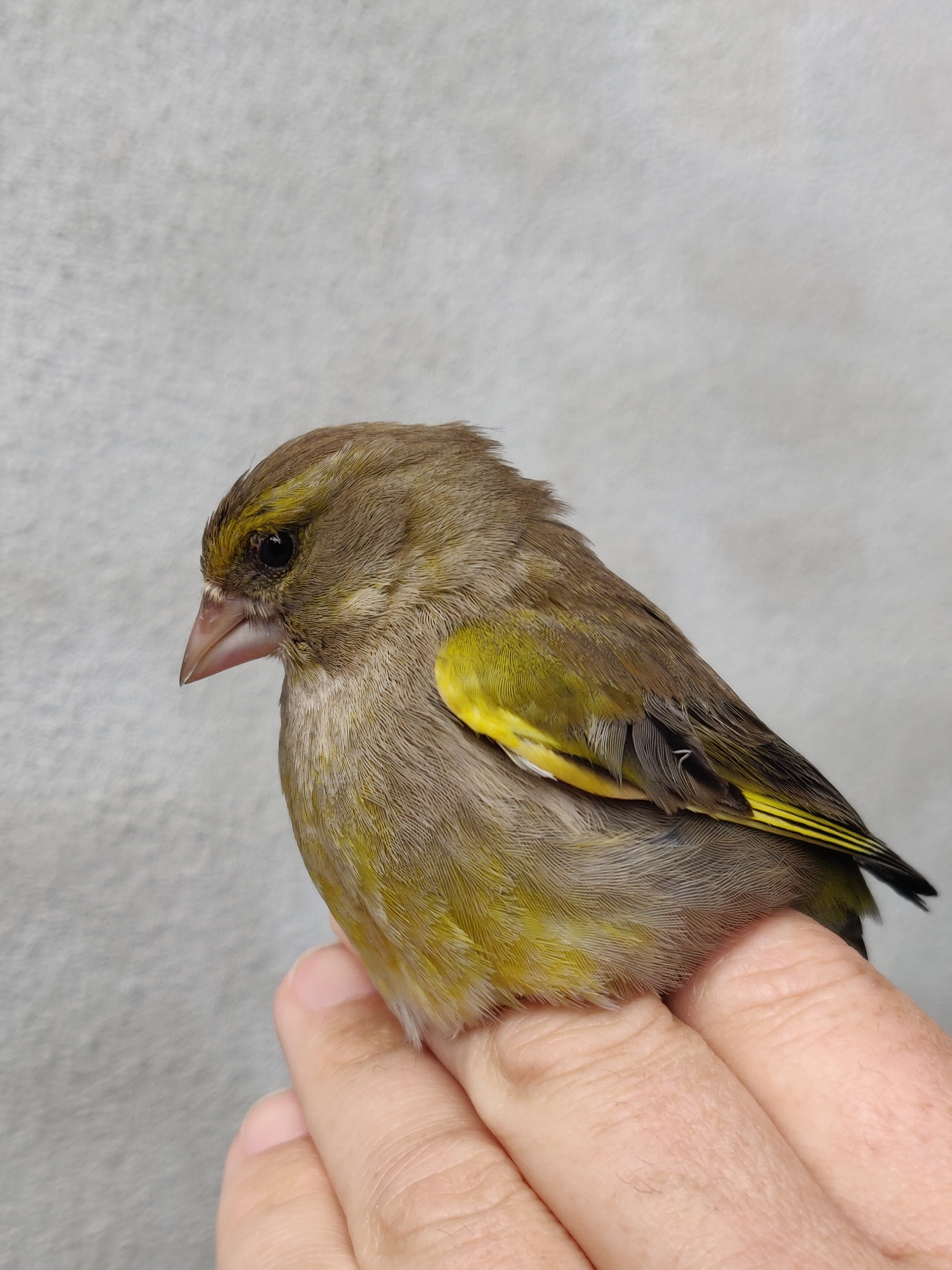 Another day with NW wind

Today we caught the same bird 4 times. It was ringed on the 24th and we saw it graditly add some weight. The last time today, it was in the stationshaven while the other three times it was caught at the lighthouse. So it is slowly migrating again. 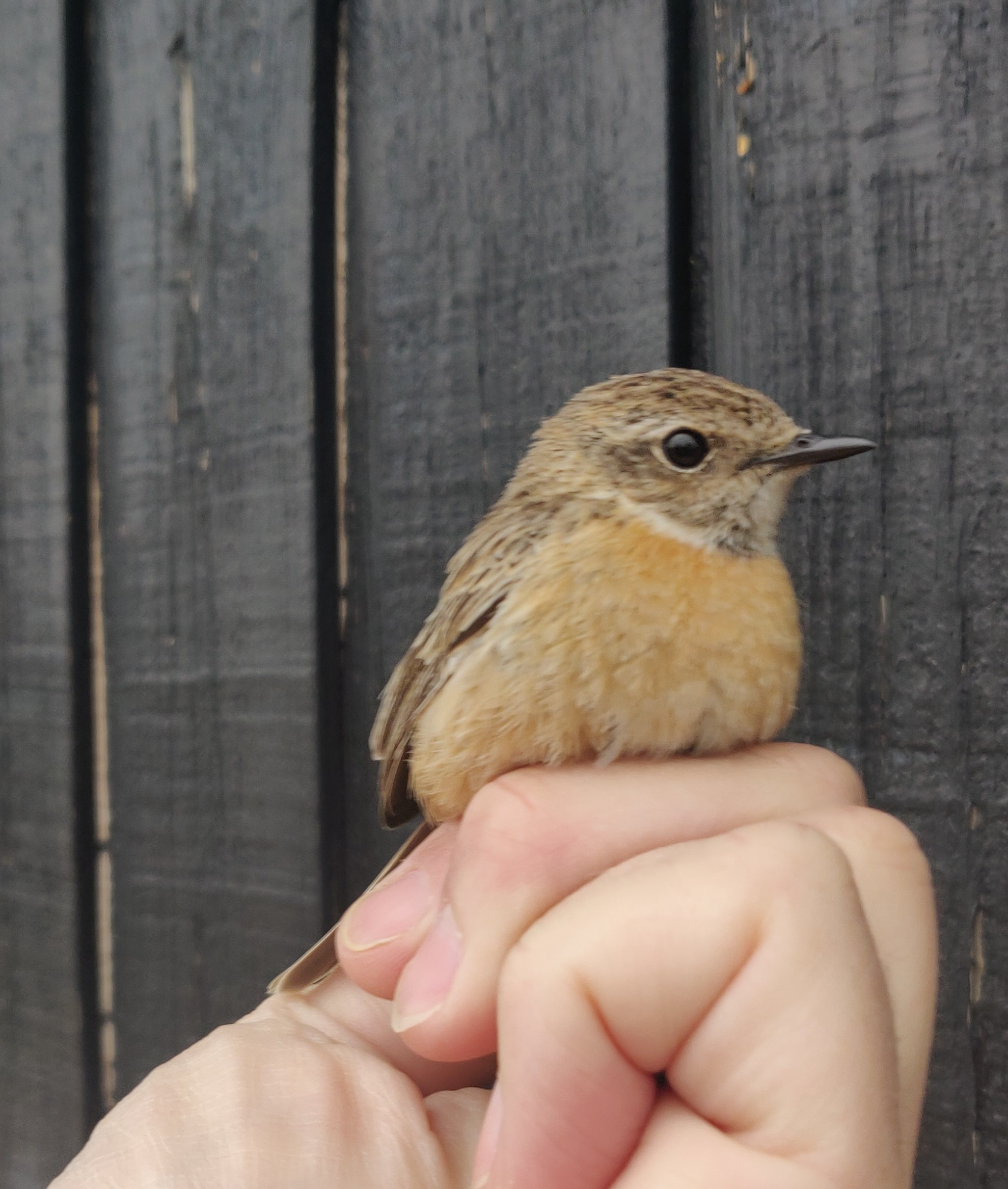 Confused by the summertime

Today the time changed into summertime because I was not really alert on this. I started opening the nets a 5:45, this was an hour earlier than needed. But this could be a nice change for catching a woodcock or a long-eared owl. Unfortunately, they did not enter the nets.

After the second round, I joined Bello for some time on the sea watch. After some time, we saw a slender looking lesser black backed gull. It also had a very dark and almost no white in the wing. These are all pointers toward a Baltic gull (ssp. fuscus), but it is hard to say because the variation in ssp. Intermedius can also show this. Only birds with rings from known colonies where ssp. fuscus breed can be safely identified. We could not find it back, so we could not check if it was ringed. The whole count resulted in around 1200 common scoters and around 350 common gulls going north.

Another first this season was a 2k female fieldfare. Fieldfares are in spring quite rare to be caught, the last time one was caught in spring was in 2016. Next to that, it was very nice to study this species in good detail. Although Bello was almost asleep, he managed to grab some nice photos of this bird. 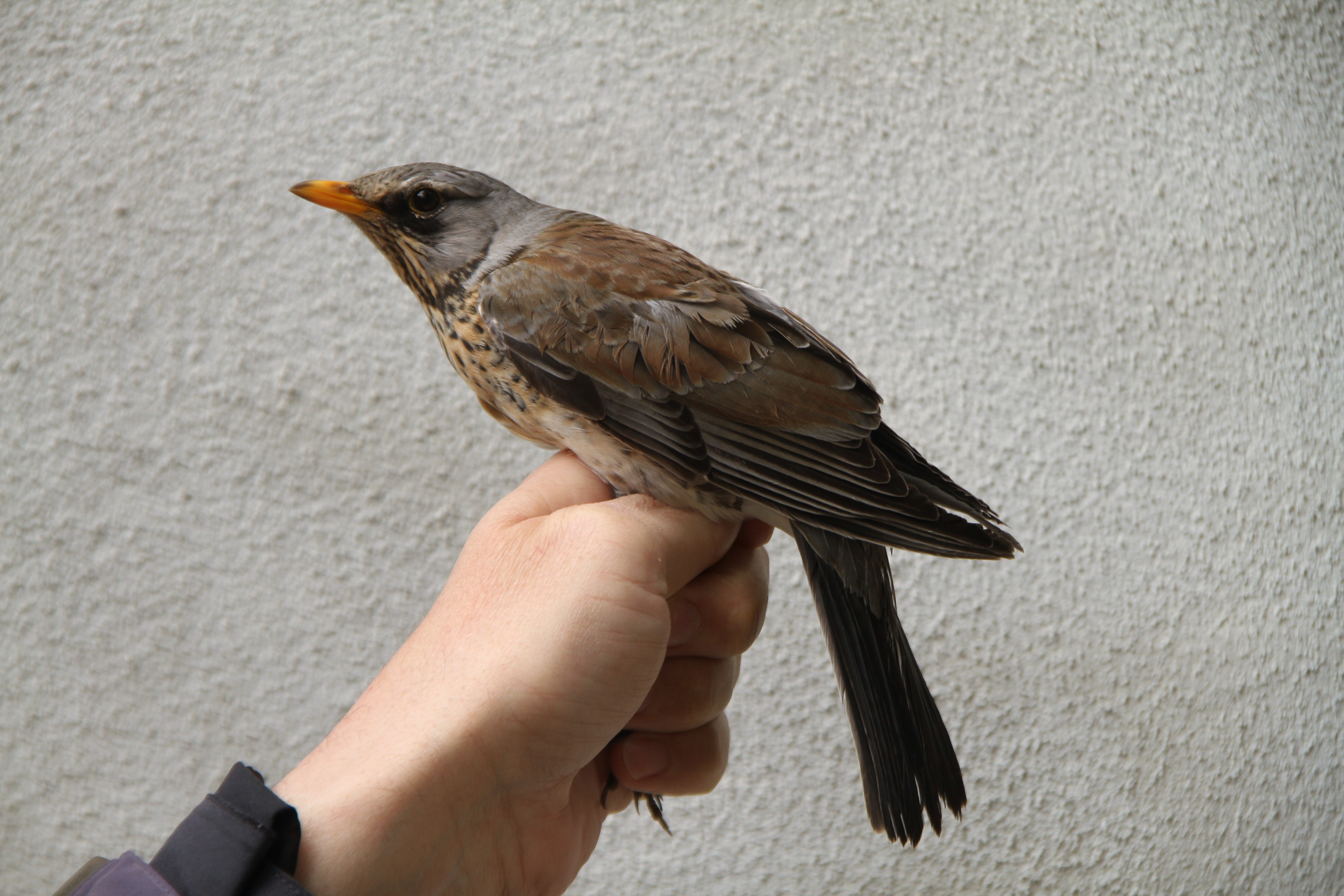 Today we got visits from Sven and Svend. Sven was here because when he left yesterday, he still got a bag of Bello in his car after they birded together yesterday. Svend brought the new gull guide and some cake, so we have some good new literature to study. And had a talk over a cup of coffee and a piece of dagmartærte, a traditional Danish cake. The book will really help find a rare gull on the beach.

Morten said that there will be a chance that the Nothern lights might be visible today, so we did a try for that. We will share the result tomorrow on the blog. 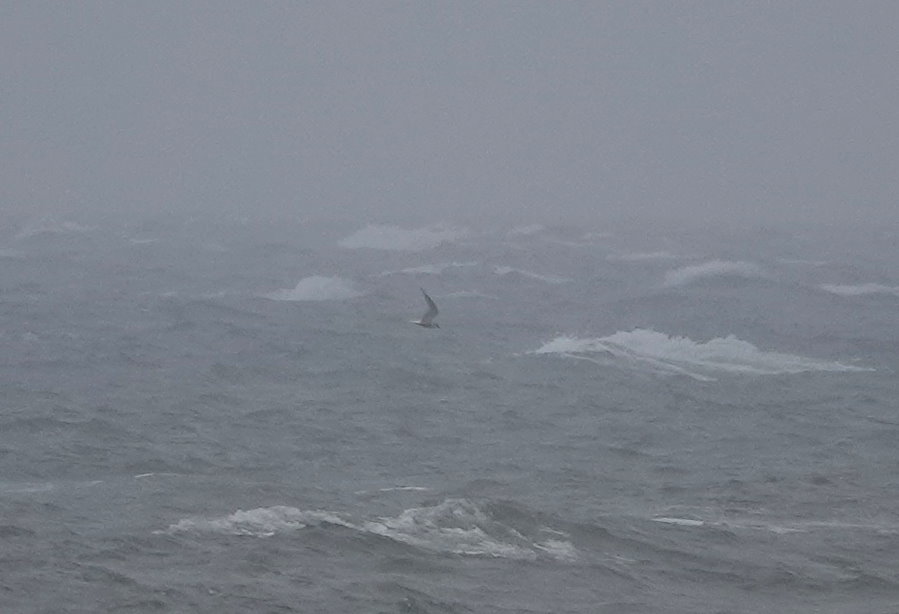 Today Morten came over to help with the ringing. It was not that busy with only 27 new birds. Morten has been here before, and clearly knows the way around the station. Although it was not that busy with birds, the weather was quite nice. But today it was not in the numbers, but in the quality of species. The first bird in the nets at the lighthouse was a short-toed treecreeper. A really nice species, and definitely one I wanted to see up close.

In the next round at the lighthouse, we had a male bullfinch in the nets. Earlier this week we caught a female, but a male is just a bit more beautiful. After Bello finished the counting, he did not see anything noteworthy, we did a round with four of us (Morten, Bello, Sven and me) and we caught a female bullfinch. It was quite a good day for bullfinch, but in previous days we heard many flying around. 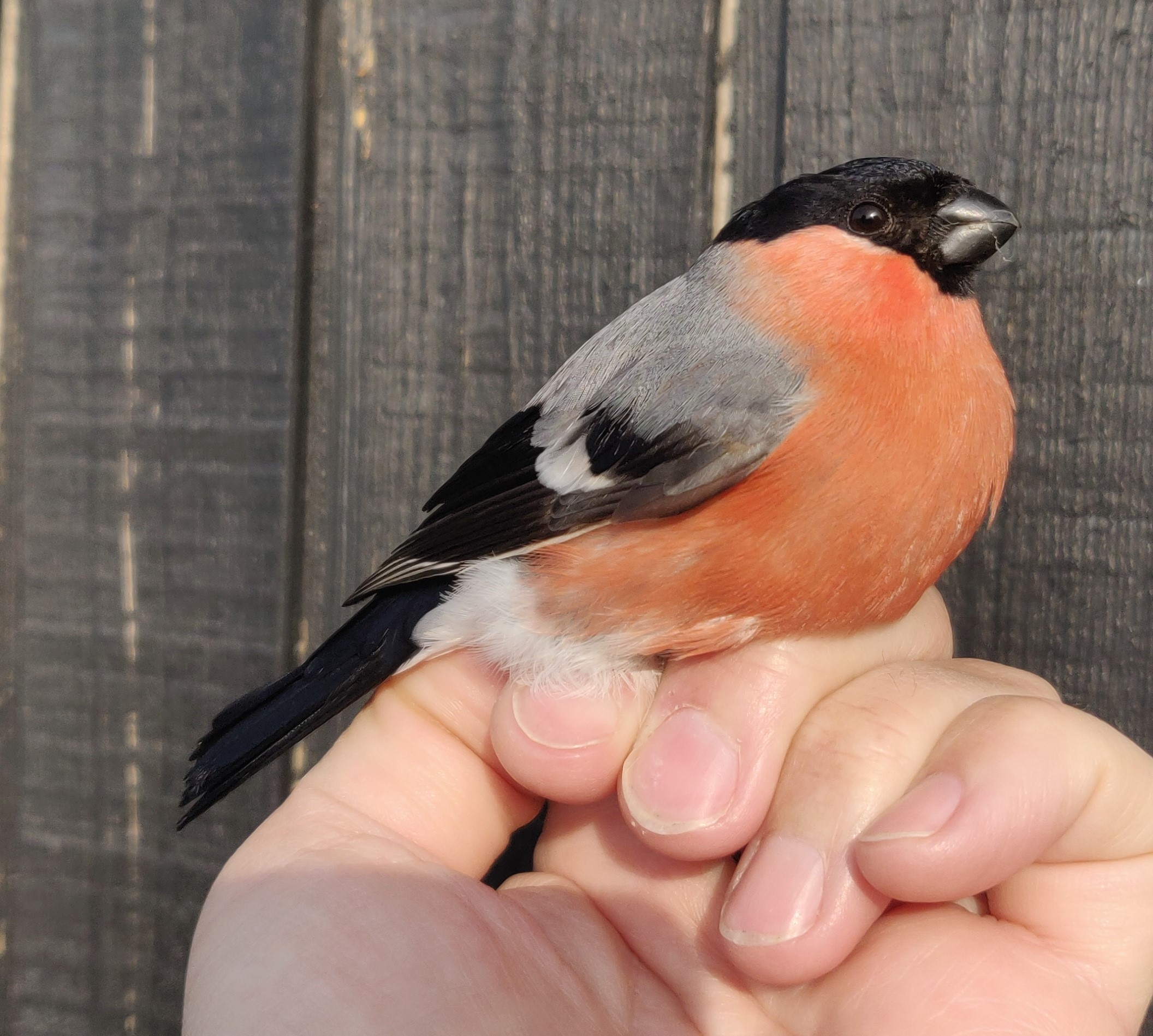 Sven made some recordings today to make some movies to get more people enthusiastic about the work that is done at the station. Later on, the day, he also had a meeting with Bent and John about this.

Sven making recordings of the ringing of a blackbird, with Bello on the left writing, Morten ringing in the middle and Sven filming it all on the right. – Photo by Menno

The first real rarity of the season

Today was a promising day after the enormous ringing day yesterday. It was quite nice, but now most of the birds were in the lighthouse garden. During the second round Bello called me that he and Henrik could have seen an Black scoter. With the high amounts of common scoters at sea around Blåvand, I suspected that this species could turn op every moment. Unfortunately, Henrik did not manage to take a picture. When he stood on the beach, with the birds in the scope the group with the Black scoter flew up. Bello saw it then again flying south and managed to relocate it. Because of the fog, the pictures are not clear, but it looks promising. Hopefully it comes around another time close by so the determination can be clinched. Bello also saw a whatear, his first of the year. In one of the last rounds, we came across a black redstart in the nets. It was not an adult male, but it nevertheless was very nice to see this species in the hand.

In the evening we had another try for the black scoter Bello found earlier today. We managed to see the more extensive yellow knob on the bill and we noticed that the headshape was quite different from the common scoter. For Bello this was his first found of black scoter, for me it was the second one within half a year. I saw the first dutch twitchable record back in October.

Bello looking for the black scoter - Photo by Menno

Tonight we will be joined Morten and Sven, who will help with the standardized methods.

Today the ringing started quite good, with a recapture of a chiffchaff from Norway. We are still waiting for the details, but we will post it when we get a reaction. On the next round, the nets where full of birds. To get an impression I put in a photo in of the amount of bird bags we had. The chiffchaff was not the only recovery, we also had a redpoll ringed somewhere in Denmark. With a quick reaction of the ringing central, we can show its route already. It was ringed in October 2021 in Glæde. So it probably wintered somewhere south of Blåvand, and is migrating north to its breeding place. The birds in the garden kept flying into the nets until 1, this was also the time Bent to leave so it played out perfectly today. The only downside of all those birds, is that I spend over an hour to put all the data in the database.

An impression of the amount of birds 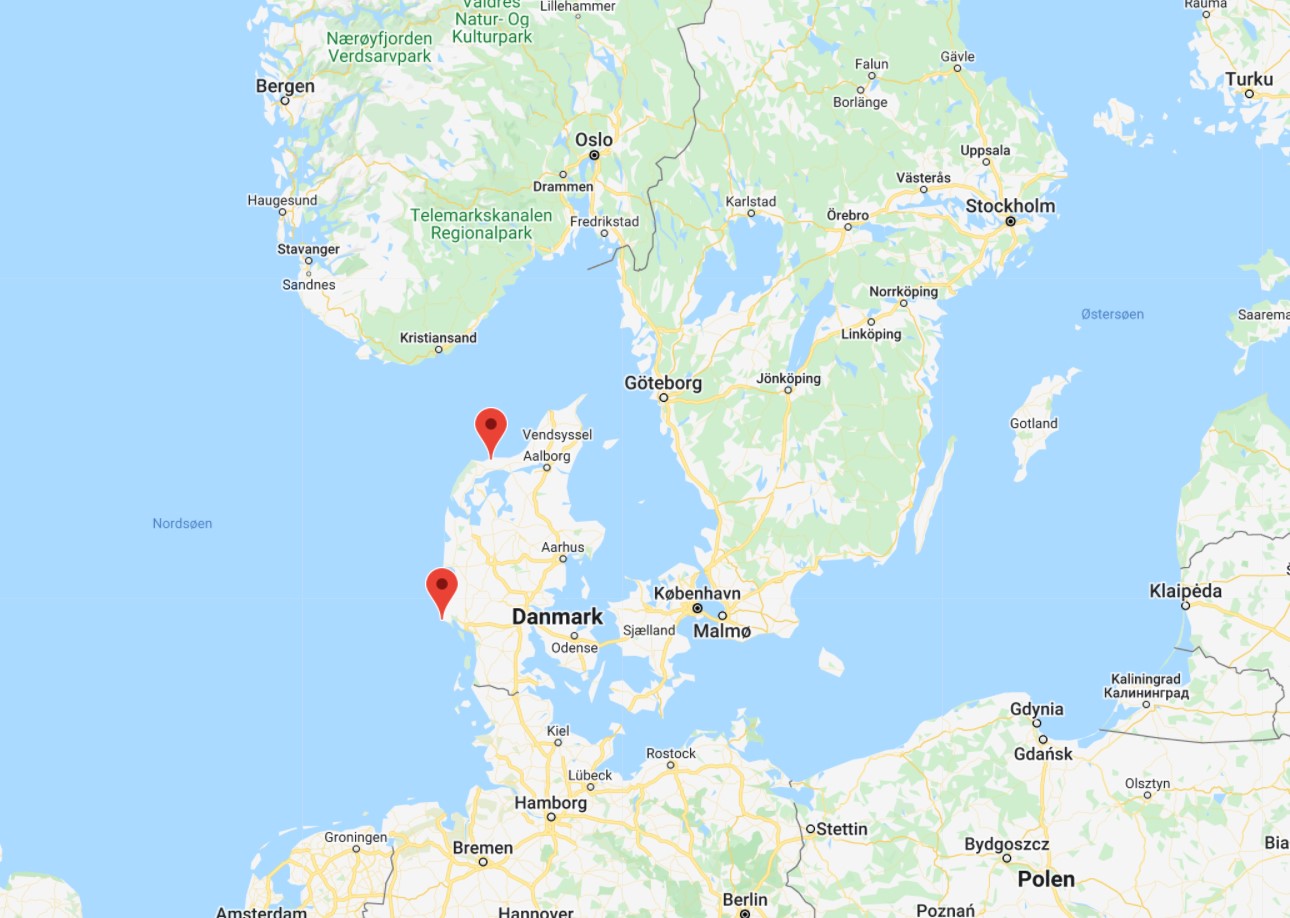 The route of the ringed Redpoll

Not only the ringing was really successful, Bello saw two Slovenian grebes flying north, this is quite rare bird around here, especially this early in spring. Next to that, he also saw some Sandwich terns. These birds winter in Africa and are slowly returning to their colonies in Scandinavia.

People at the station: Bello, Bent and Menno 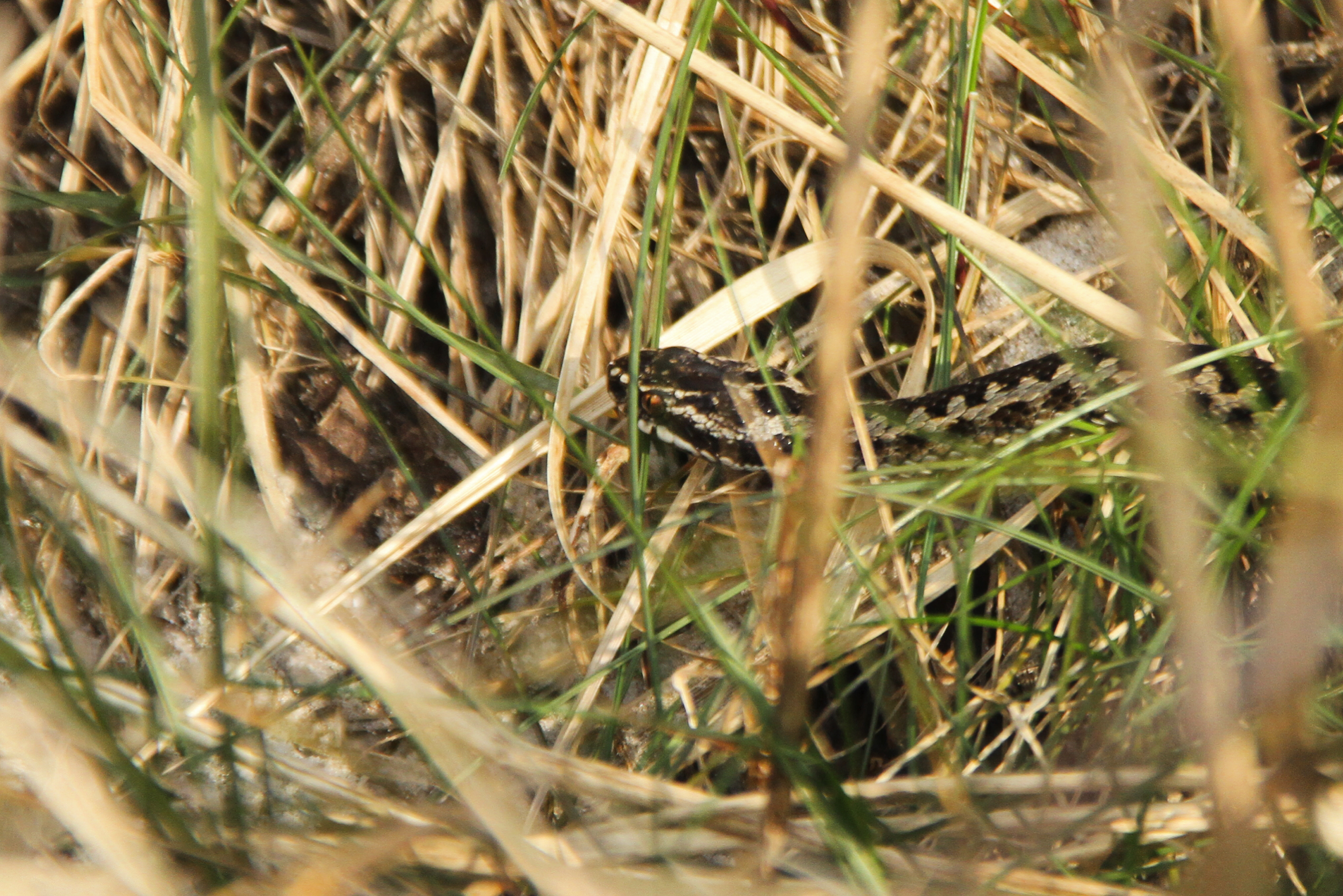 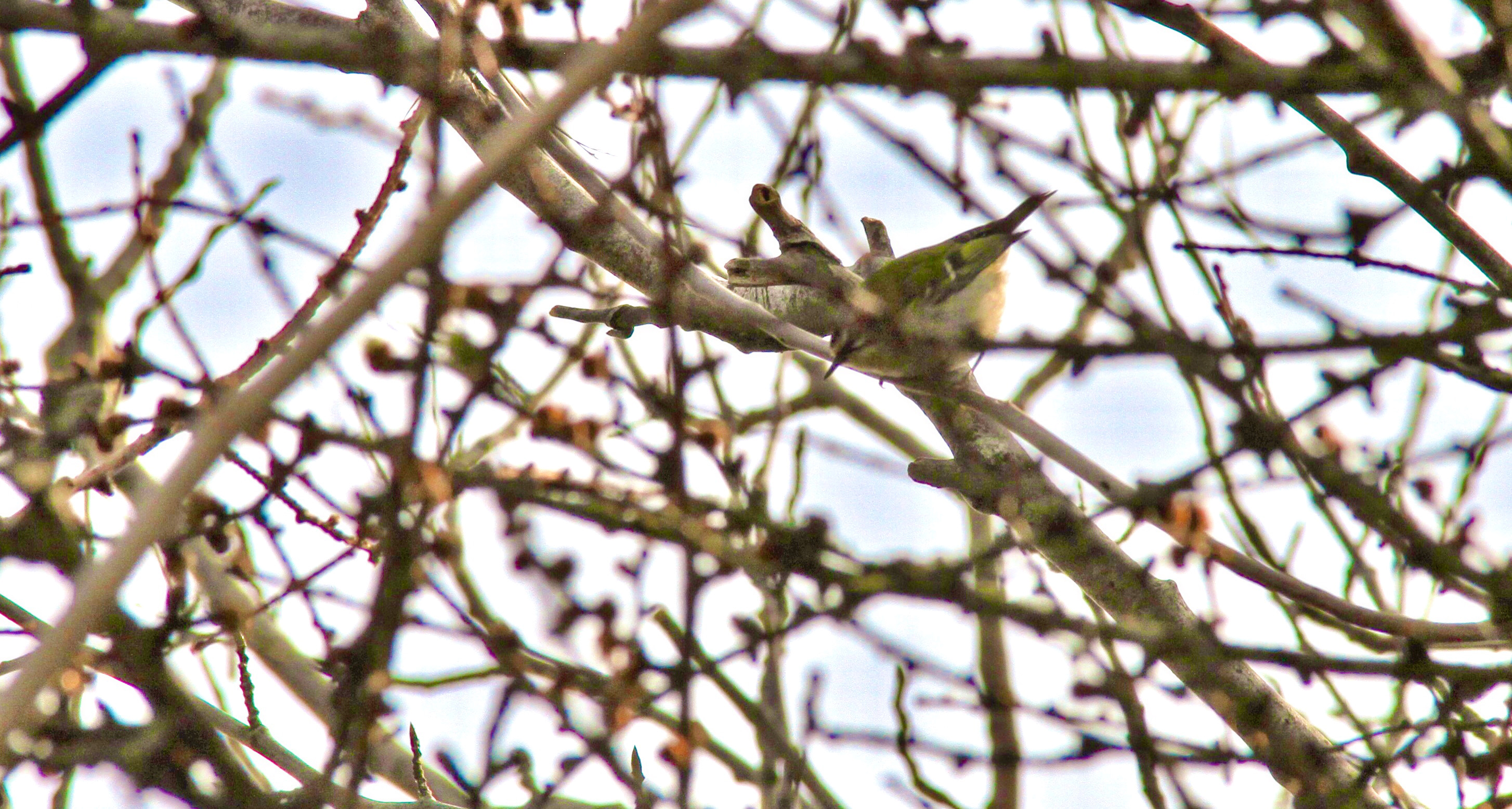